In 1992 I happened across a figurine of Santa kneeling at the manger. I had never seen it before and it really spoke to me as Mariah was just a toddler and I wanted the values I saw in the statue to shine in her Christmases too. I needed to make sure the message that the gifts from “Santa” are rooted in God’s passing his great love to us as gifts in memory of His greatest gift. Although the budget was pretty tight in our household, it tugged at my heart so much that I bought it not knowing for sure what meals we might have to scrimp on. Eventually I also bought ornament size ones so Mariah and Rochelle could have it in their future Christmases too after they moved out. And Elsie and Ragnar have now been given the ornaments and book. Jesus is Still the Reason for the Season in my life and the figurine of Santa kneeling in reverence at the manger with the Christ Child still brings tears when I see it.

On Christmas Eve the other night
I saw the most amazing sight,
for there beneath the Christmas tree
was Santa kneeling on his knee.
His countenance was different than
that all-familiar, jolly grin;

his head was bowed, and hand to breast,
and slightly tucked into his vest.
For there in a Nativity
was Jesus and His family,
and as I heard him start to pray,
I listened close to what he’d say.
“Lord, You know that You’re the reason
I take pleasure in this season.

I don’t want to take Your place,
but just reflect Your wondrous grace.
I hope You’ll help them understand
I’m just an ordinary man,
who found a way to do Your will
by finding kids with needs to fill.
But all those centuries ago,
There was no way for me to know,
that they would make so much of me,
and all the gifts beneath the tree.

They think I have some hidden power
granted at the midnight hour.
But it is my love for You
Inspiring all the things I do.
And they give You all the Glory,
For, ‘You’re the One True Christmas Story.” 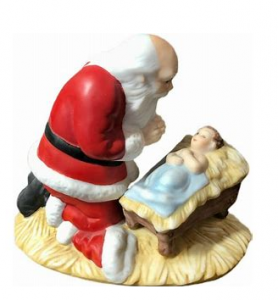 **********************************
KNEELING SANTA STATUE
While raising his own family in the 1970’s, Raymond Gauer became increasingly concerned about the over-commercialization of Christmas. In an effort to counteract that trend, he was inspired to create the beautiful figurine of the Kneeling Santa.
This rendition of that image from Joseph’s Studio shows Santa kneeling in adoration and gazing lovingly upon the sleeping Christ Child in the manger thus placing things in their proper perspective with the secular (Santa) subservient to the sacred (Jesus).
This statue is a beautiful reminder for us to keep our priorities straight.

Kneeling Santa
Perhaps Gauer will be especially remembered for the Kneeling Santa, an idea which came to him on retreat at a Trappist Monastery in Kentucky in the late 1940s. His plan was to depict Santa Claus kneeling before the Infant Christ, because, as he explained, “Santa Claus is really St. Nicholas and would be the last person to detract from the real reason for the season — the birth of Christ.”