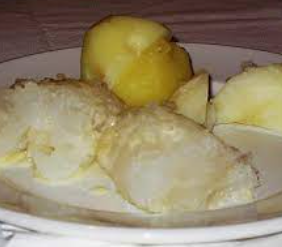 fondest memory I have of Christmas is when mom went to buy the Lutefisk for out Christmas Eve meal.

I would wait for her to come home from the grocery store and when I looked at what she brought home my eyes got very wide. It was so much bigger than any fish fillet I had seen!

Then the wait started. Depending on when she bought it, I couldn’t wait until it was time to cook it. I have learned over the years that a lot of people boil their Lutefisk. My mom never did that. She always put it in the big blue speckled roaster. She told me not to use any other kind of pan. I did not ask why. I knew that was the pan she would cook it in every year.

I watched as she would put that huge fillet of fish in the roaster. The next thing she did was get the salt box out and start to put handfuls of salt over the fish. I would ask her how much salt she would use and she always told me she just guessed how much it needed. Who was I to question her?

She covered the roaster with aluminum foil and put it the oven. She never set a timer because she knew about how long it would take. And she could tell it was done by looking at it. The smell of the Lutefisk baking was the best smell. It was so fishy smelling but I did not care. I just knew how good it was going to taste.

While it was cooking the potatoes were put on to cook and mom started the white sauce. Oh that white sauce was going to taste so good on the mashed potatoes and the Lutefisk. Of course there was lots of real butter to for both! When it came time to eat I was so excited. I was usually the first one to the table. My other sisters did not enjoy it like I did.

The final icing on the cake was Christmas morning when we had Cream Lutefisk on toast for breakfast! This was the only time of the year that we had Lutefisk.

Since my mom passed away I have not had baked Lutefisk. I have tried a couple of different church dinners, but theirs was boiled and just was not the same. I think  if more people baked it, more people would eat it!